In a world before television, mobile phones and the internet many companies relied upon advertising posters and displays to attract customers. These were often positioned in railways, bus stops, on the London Underground, or other places people stood, including petrol stations. This oil cabinet with its bold and iconic robot design made Shell Oil a popular choice for 1930s motorists.

About the designer – Ted kauffner

In the 1930s, graphic designers and their work became famous for its bold imagery, and though the artists were initially unknown. Designers such as Norman Wilkinson, Frank Newbould, Abram Games, Tom Purvis and Edward McKnight Kauffer are now revered and their original posters and designs are highly collectible.

Born in Montana, USA in 1890 Ted Kauffer went to study at the California School of Design aged 20. His work so impressed Professor Joseph McKnight of Utah, that he sponsored Kauffer to study in Paris – and in gratitude Kauffer added McKnight to his name.

As WW1 started, he left France to come to the London where he worked as a traditional painter as well as providing artwork for books. In 1930 he featured a Robotic image – possibly inspired by the small wooden mannequin artists use to aid life drawing. He came to prominence working for London Underground, where he produced 140 posters. His output for Shell was somewhat smaller – but he introduced the robotic figure seen here in 1934. The image was seen on many Shell products and in their magazine and poster adverts. As well as the large conical oil display cabinet – for use next to petrol pumps on a forecourt - we have 5 other items showing the ‘Robot’ logo. If you have any similar items please let us know.

Steel shortages in WW2 meant many items such as this oil cabinet were donated towards the war effort. As such this is rare item, with fewer than ten thought to survive. Unfortunately it came to the Museum heavily painted in tar, and though we removed the tar, the paintwork was badly damaged and imagery almost entirely invisible. Thanks to the assistance of the Grampian Transport Museum (www.gtm.org.uk) who have an example in its original livery we have fully restored this example, copying the signage as accurately as possible. 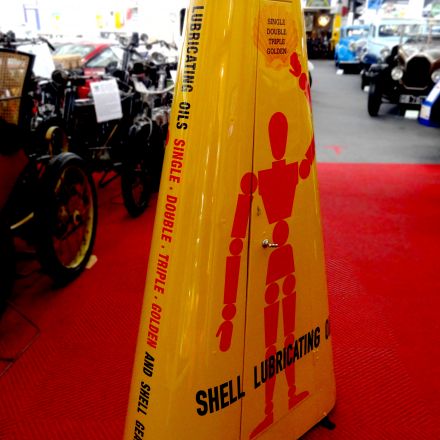 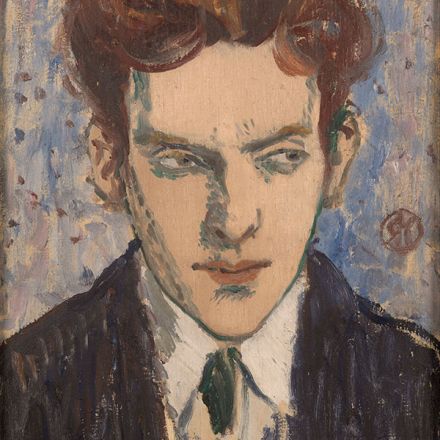 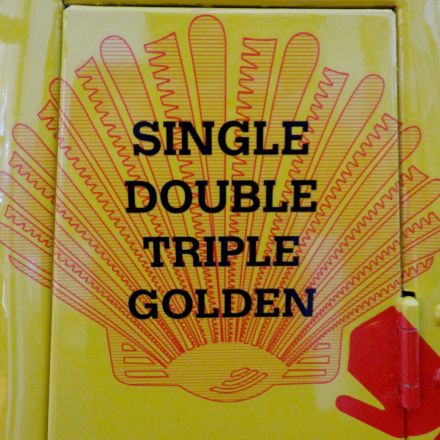